From the late 1930s to the late 1950s, Lawrence Klee was one of the busiest scribes working in radioâlargely owing to his employment with the Hummert daytime drama factory, which churned out âsoap operasâ like sausages. Among the âweepiesâ to which Klee contributed during his lengthy radio career: Backstage Wife, Chaplain Jim, Front Page Farrell, Hearts in Harmony, Valiant Lady, and Young Widder Brown. During World War II, Lawrence worked on behalf of The Victory Players of the American Theatre, a professional organization that employed writers and actors to create patriotic content for the war effort. Kleeâs contributions to promote buying war bonds would win him recognition from the U.S. Treasury Department in the form of a silver medal.

After the war, Lawrence Klee made the gradual shift to penning scripts for the aural mediumâs popular crime dramas, serving lengthy stints with The Fat Man and Mr. Keen, Tracer of Lost Persons while also working on the likes of Mr. and Mrs. North and Mr. Chameleon. On this date in 1946, a dramatic anthology program created by Mr. Klee premiered over the American Broadcasting Company: old-time radio fans know it as The Clock. As documented by Radio Spiritsâ Martin Grams, The Clockâs origins can be traced to England, but it âimmigratedâ across the pond when ABC officials developed an interest in the program.

The productions dramatized on The Clock centered around the subject of time, with the playsâ narrator a âFather Timeâ figure (portrayed in the seriesâ early New York years by Charles Webster) who made his declarations against the background of a ticking cadence. âIn England they call me Ben, and I have a large and extremely showy flat in Westminster Tower but just between the two of us, I feel much more comfortable at the end of a chainâ¦and there's the quiet old lady who keeps a favored place for me in the corner of her roomâ¦to her, I'm known as Grandfather.â The stories on The Clock were saturated with tense situations not unlike âradioâs outstanding theatre of thrillsâ (Suspense), and spotlighted well-written scripts by Klee, complemented by taut direction courtesy of Clark Andrews, fine performances from the likes of top East Coast talent like Alice Frost and Joe DeSantis, and appropriate mood-setting music from Bernard Green. The announcer during the seriesâ New York run was Gene Kirby.

With the March 4, 1948 broadcast, The Clock relocated to the West Coast where ex-Suspense director-producer William Spier took over the showâs reins. Bill even helped himself to scripts originally showcased on Suspense, notably âThe House in Cypress Canyonâ and âBank Holiday.â Replacing Webster as âFather Timeâ was âThe Man of a Thousand Voiceâ himself, William Conrad, and Spier also took advantage of the top performers along âRadio Rowââchiefly âMr. and Mrs. Radio,â Elliott and Cathy Lewis, but also stellar thespians like Hans Conried, Jeanette Nolan, Joseph Kearns, and Lurene Tuttle. The West Coast Clock would only run for thirteen weeks before being canceled by ABC (it was a sustaining series). and Bill Spier would soon be welcomed back to the program (as producer) where he made his reputation as âThe Hitchcock of the Airlanes.â

Six years later, Lawrence Klee would return to similar territory staked out by The Clock with The Chase, this time with the emphasis on tales dealing with âthe hunter and the hunted,â with the protagonists of Chaseâs melodramatic stories often on the run. The Chase was also a New York production, featuring veteran performers like Luis Van Rooten, Mandel Kramer, Jan Miner, and Staats Cotsworth. It aired over NBC from April 27, 1952 to June 28, 1953. The Clock would resurface on the small screen as a live anthology series beginning on May 16, 1949 and enjoying a four-season run on both NBC and ABC before bowing out on January 8, 1952. Klee contributed several stories to the TV version. There was also a revival of The Clock in the Land Down Under, with the Australian incarnation heard between 1955 and 1956. 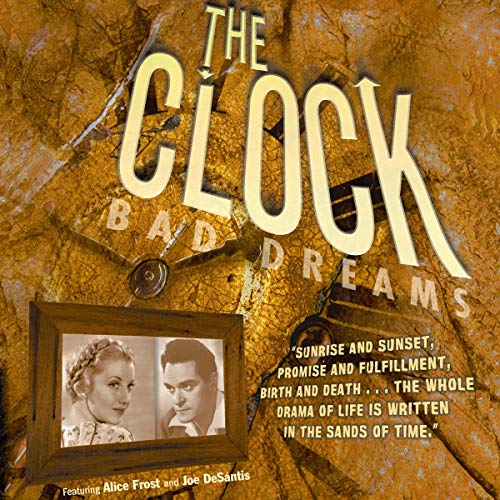 âSunrise and sunset, promise and fulfillment, birth and deathâ¦â Radio Spirits invites you to check out this underrated series of suspense with Bad Dreams, a collection of eight vintage broadcasts (including the West Coast premiere) available in our digital downloads store.