On the subject of the Golden Age of Radio, one word frequently comes to mind: versatility. Its dramatic shows often presented tales well-calculated to keep you in…Suspense! (If you listened to Bob and Ray, however, you heard “tales well-calculated to keep you in…Anxiety!”) If you were tired of the everyday grind and wanted to get away from it all, radio offered you…Escape! If you were interested in hearing “transcribed tales of new dimensions of time and space,” Dimension X and X-Minus One were your meat.

On this date in 1943, CBS premiered a program intending to present “the great stories of all time—tender love stories of today, the memorable love stories of the past.” It was appropriately titled Romance, and although it enjoyed a lengthy run over the airwaves (its last broadcast was January 5, 1957), it’s often received the same sort of attention and respect normally afforded a middle child, or Rodney Dangerfield. An innocuous observation by John Dunning in his entry on the show in On the Air: The Encyclopedia of Old-Time Radio ignited a spirited debate among old-time radio fans. Dunning’s description of the series as “a 30m schedule filler” was grabbed and run with by some…only they skipped over his further assessment of Romance as “a fine series” and that the program “just bloomed.”

Romance began as a sustained series. Its early broadcasts featured familiar stories that had previously received the silver screen treatment, such as “If I Were King” and “Dark Victory,” balanced with original dramas as well. The host of the program was Frank Gallop, described by Dunning as “a sober-voiced announcer at best, was an undeniable talent with comedy; he gave this an almost teary presence.” (Look, John’s not wrong about the comedy part. Listen to The Milton Berle Show or Berle’s radio Texaco Star Theatre and you’ll see what he means.) The acting talent on Romance included the likes of pros such as Alice Frost and Santos Ortega, and the show retained its sustainer status until June 20, 1944.

July 4, 1944 marked the debut of the rebranded Romance. Under the sponsorship of Colgate Tooth Powder, Palmolive Soap, and Halo Shampoo, the program now answered to Theatre of Romance. It also welcomed in big-name Hollywood talent—Humphrey Bogart, Shirley Temple, Van Johnson—and a new host in actor Arnold Moss. (Frank Graham, described by Dunning as “only slightly less morose than Gallop,” later took over hosting duties.) Adapting tried-and-true classics (“Casablanca,” “Bringing Up Baby”) with original playlets was the job of Jean Holloway. The series—a kind of Lux Radio Theatre, Jr.—would continue to plug soap and shampoo until August 27, 1946. 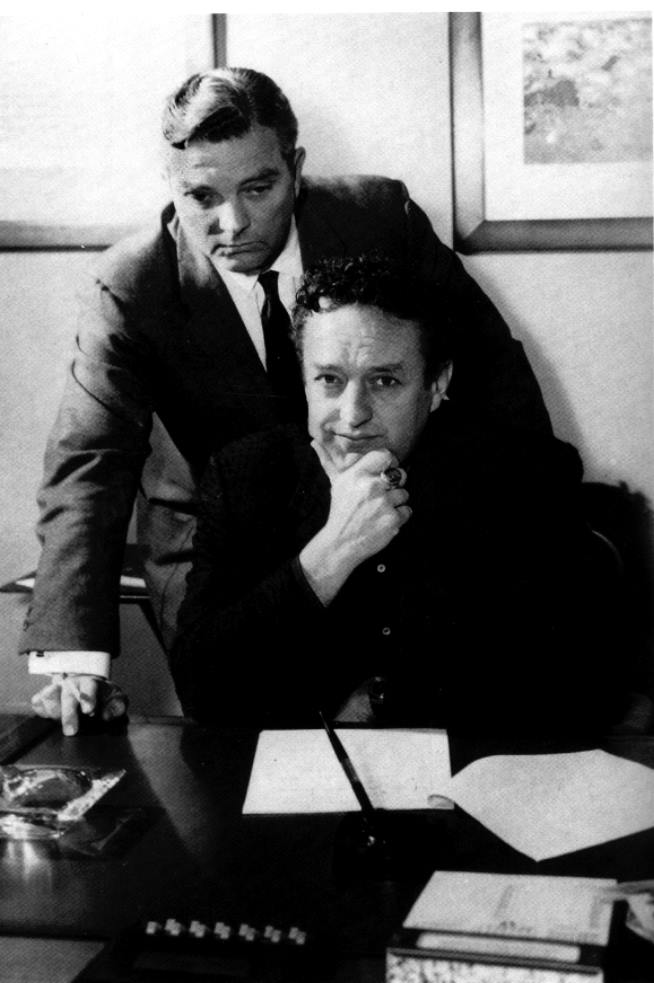 From October 2, 1946 to February 5, 1949, Romance would experience the same sort of scheduling problems that would later befall programs like Broadway’s My Beat and Escape. It hopped around like a hyperactive chess piece; sometimes heard on Mondays, sometimes Wednesdays…then switching to Fridays or Saturdays. The show would nevertheless keep its distinctive theme music, with scripts by Charles Monroe and direction by Albert Ward. Ward would be replaced in the final broadcasts by Norman Macdonnell, a talented director-producer making a name for himself on shows like Escape and The Adventures of Philip Marlowe. (An attempt to bring Romance to the small screen around this time was not quite a success, airing briefly from November 3, 1949 until December 29, 1949.)

Macdonnell would still be the director-producer of Romance when it returned on June 20, 1950 as a summer replacement for Life with Luigi (sponsored by Wrigley’s Gum). (Romance would again see summer duty in 1951 and 1952, giving The Lux Radio Theatre vacation time off.) Norm would be joined by writer-editor John Meston, and many of the program’s broadcasts would feature members of Macdonnell’s informal “stock company”: William Conrad, Georgia Ellis, John Dehner, Lawrence Dobkin, etc. In case you were getting ready to write this all off as an amazing coincidence, the August 6, 1951 broadcast, “Pagosa,” played an integral part in developing Macdonnell and Meston’s Gunsmoke.

Romance‘s acquisition of Jergens Lotion as a sponsor in the fall of 1952 got the show another rebranding as The Hollywood Playhouse of Romance…but the Jergens sponsorship was a brief one, and it was back to the sustainer salt mines (and Romance) until December of 1953. The period between May 22, 1954 and January 5, 1957 saw the series’ most sustained run, with direction from Antony Ellis and Fred MacKaye and scripts by familiar Gunsmoke names like Les Crutchfield and Kathleen Hite. Many of the program’s surviving broadcasts are from this period as well. 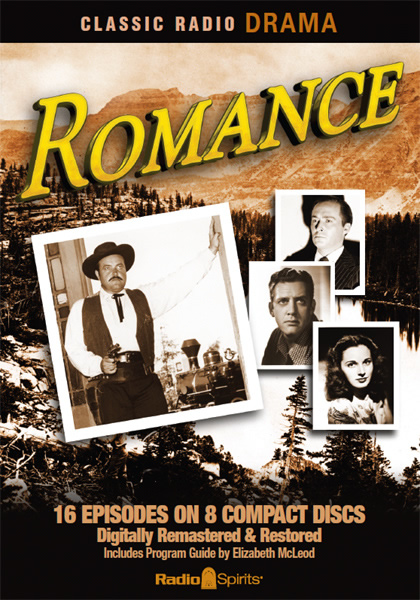 And speaking of surviving broadcasts (ah, these segues are a thing of beauty), Radio Spirits offers up a splendid collection of broadcasts on Romance, which even features the previously mentioned Gunsmoke blueprint, “Pagosa.” You’ll also find a Yuletide Romance (“Richer by One Christmas”) on our potpourri set Radio’s Christmas Celebrations and four Romance shows showcasing Robert Bainter Bailey on The Bob Bailey Collection. “Columbia presents…Romance!”