Despite his incredible career as a radio/TV announcer and emcee, George Watt Fenneman—born in Peking (now Beijing), China on this date in 1919—was never hesitant about crediting the job that secured his fame and fortune: straight man to “quizmaster” Groucho Marx on the long-running You Bet Your Life. “Listen, those were the biggest 15 years of my life,” Fenneman reminisced to the Los Angeles Times in 1975, about the time KTLA-TV started displaying the series in reruns. “You Bet Your Life was my career.”

To Groucho, George was “the male Margaret Dumont”—a reference to the character actress who served as the comedian’s formidable foil in such classic Marx Brothers movies as Duck Soup (1933) and A Night at the Opera (1935). George Fenneman frequently found himself the target of Marx’s rapier-sharp barbs on You Bet Your Life. For example, when Fenneman once took too long to add up a contestant’s earnings, Groucho cracked: “Look at this idiot. He can’t even add two and two, and he went to Stanford.” 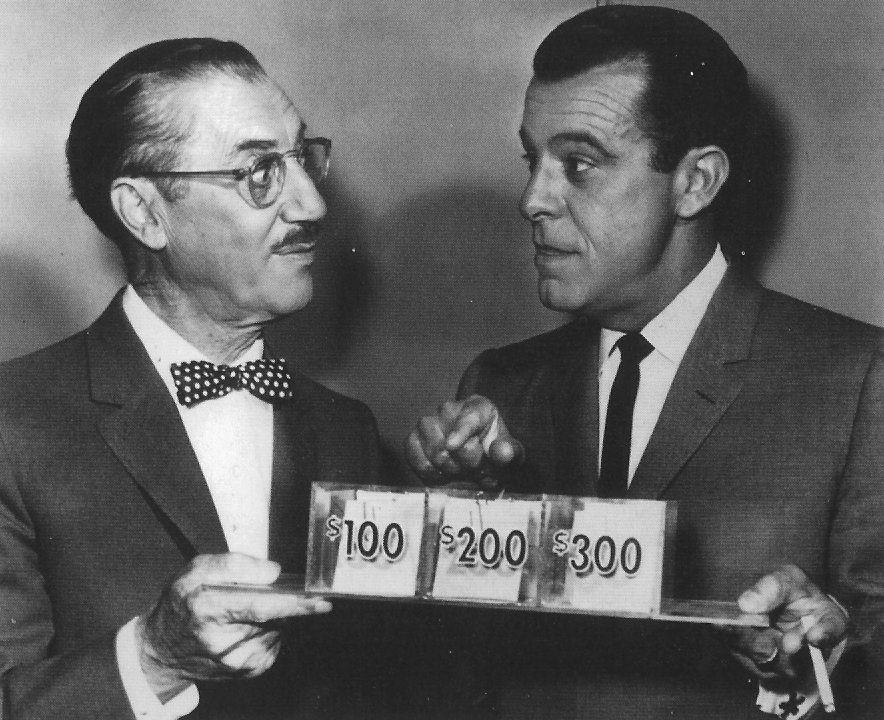 It wasn’t being called an idiot that bothered Fenneman—it was the fact that George was a proud alum of San Francisco State, and he was concerned about any misrepresentation. So he timidly asked Groucho for an on-the-air retraction…and his boss was extremely happy to oblige. The following week, Marx announced to everyone in Television Land: “Here’s this idiot who can’t add two and two and who couldn’t get into Stanford.”

George Fenneman’s place of birth (Beijing) was a never-ending source of comic inspiration for his future boss, who often found politically incorrect “Chinese laundry” jokes too tempting to resist. The only child of an importer-exporter, Fenneman was nine months old when his parents moved to San Francisco, CA. It was here that young George had dreams of show business at the age of eight, while staging amateur theatricals in his folks’ basement. After graduating from San Francisco Polytechnic High School, Fenneman enrolled at the previously mentioned San Francisco State College, graduating with a B.A. in speech and drama in 1942.

Before graduating from college, however, George Fenneman was making inroads into a broadcasting career, beginning with a $35-a-week job at KSFO in 1941. Here he hosted Lunch at the Top of the Mark, where he interviewed celebrities like Boris Karloff. A year later, Fenneman moved to KGO (he got a $20 raise), where he got the opportunity to flex his thespic muscles by playing legendary bandit Joaquin Murrieta (“The Robin Hood of El Dorado”) in a production entitled Golden Days. George enlisted in the service during World War II, but poor eyesight and asthma kept him out of any military action. Instead, he was sent to the U.S. Office of War Information, where he became a broadcast correspondent. He also befriended a young acting hopeful named Jack Webb…who would make effective use of Fenneman in his future endeavors. (During the war, George also teamed up with an old college chum, Bob Sweeney, to entertain troops at military bases. When Bob and partner Hal March later got their own CBS Radio comedy program, Fenneman became their announcer.)

Out of the service in 1946, George Fenneman made the decision to move to Los Angeles, reasoning “if you’re going to be in this business, you’ve got to be in southern California.” KECA welcomed him with open arms, and his 4:00 p.m. weekday program The George Fenneman Show would become one of the station’s most popular. It was around this time that Fenneman was hired to be You Bet Your Life’s announcer. George’s “courtly manner” might have clinched his landing the prestigious gig…but Life’s director, Robert Dwan, later admitted: “We picked him because he was very bright, someone who could keep track of the quiz score and do the math on the spot.” (Even if he didn’t go to Stanford.) Groucho may have leapt at every opportunity to needle his ready-made foil, but he had nothing but affection and respect for Fenneman, writing in 1976’s The Secret Word is Groucho: “There never was a comedian who was any good unless he had a good straight man. And George was straight on all four sides.”

Groucho Marx was not the only comedy legend to take advantage of George Fenneman’s talents before a radio microphone. George worked for Bud Abbott and Lou Costello during their last year on radio and did similar duty for Dean Martin and Jerry Lewis on their program in the 1950s. (Fenneman also worked on the zany duo’s TV show, where Dean and Jerry would pelt him with sheet music or cut off his tie as he tried to plug Chesterfield cigarettes.) Fenneman also did a little radio acting; he played mechanic sidekick “Buzz” opposite Dick Haymes’ “Dockery Crane” on the ABC Radio adventure I Fly Anything (1950-51). Other radio programs on which George appeared include The Amazing Mr. Malone, Dark Venture, Gunsmoke (still selling Chesterfields), The Hedda Hopper Show, Monitor, On Stage America, Roundup Time on the Range, Sound Off, and Wake Up America. 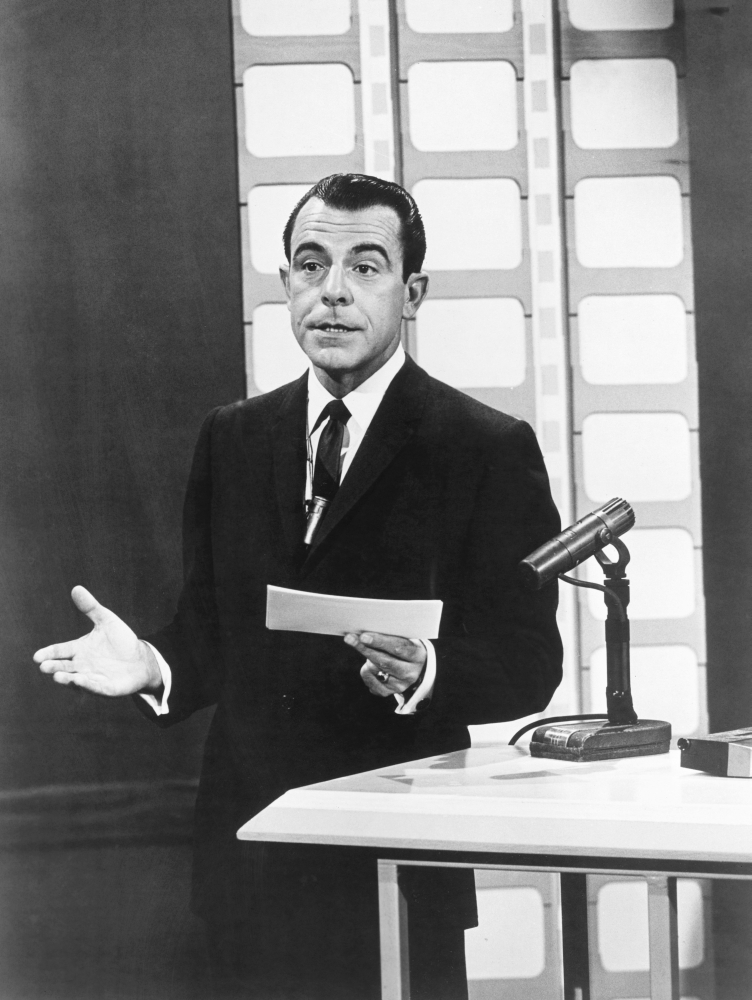 Outside of You Bet Your Life, George Fenneman’s most recognized radio showcases are the programs on which he worked for his good friend Jack Webb. Fenneman was the announcer on Pat Novak for Hire, Pete Kelly’s Blues, and Dragnet (along with Hal Gibney). George would continue in that capacity when Dragnet transitioned to television in its 1951-59 and 1967-70 incarnations. When The Simpsons spoofed Dragnet in 1993 (in the episode “Marge on the Lam”), Fenneman contributed his all-too-familiar voice as narrator.

In commenting on his motion picture debut in 1951’s The Thing from Another World, George Fenneman wincingly remarked: “”I played Dr Redding, one of the scientists. And it took me 26 takes to deliver my big speech. End of movie career.” Of course, George is being a tad facetious; he appeared in additional films like Mystery Lake (1953), How to Succeed in Business Without Really Trying (1967), and Once You Kiss a Stranger… (1969), while providing narration for Stormy, the Thoroughbred (1954) and Big Jake (1971). On the small screen, Fenneman guest starred on TV favorites such as Batman, The Danny Thomas Show, Gomer Pyle, USMC, The Man from U.N.C.L.E., The Name of the Game, Please Don’t Eat the Daisies, That Girl, and The Tom Ewell Show.

Like the one, the only Groucho, George Fenneman also tried his hand at being a quizmaster, emceeing such TV series as Anybody Can Play, The Perfect Husband (which George also did for radio), Who in the World, Your Claim to Fame, and Your Surprise Package. Fenneman’s other TV gigs include On Campus, Talk About Pictures, and Your Funny, Funny Films. Before his passing in 1997 at the age of 77, George was familiar to West Coast viewers as the spokesman for the Los Angeles-based Home Savings & Loan (he did their commercials from 1978 to 1995). 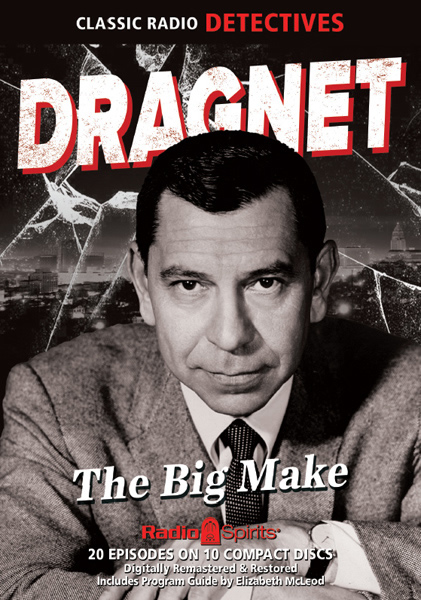 Radio Spirits invites you to celebrate the natal anniversary of one of our favorite old-time radio announcers by checking out collections of George Fenneman’s signature series, Dragnet. We have on hand The Big Make, Get ‘Em, and Night Watch. There’s a Dragnet broadcast on our potpourri set of radio gumshoes, Great Radio Detectives, as well. You can also hear George extolling the virtues of Chesterfield cigarettes in the Gunsmoke compilations Around Dodge City, Dead or Alive, Flashback, The Hunter, Last Man, and Snakebite.

In our digital downloads store, check out Mr. Fenneman’s work on Dark Venture and Pat Novak For Hire: Pain Gets Expensive. You’ll find a lot more Dragnet here, too, in the sets The Big Blast, Big Crime, The Big Death, The Big Gamble, Crime to Punishment, Official Files, and Protect the Innocent. Happy Birthday, George!