Cashing in on the success of Charlie Chan and Mr. Moto, Monogram Pictures ushered in their own Asian detective series in 1938 with Boris Karloff as Mr. Wong, Detective. With horror films temporarily in the doldrums and his career needing a new direction, Karloff jumped at the chance to play the gentlemanly and dignified sleuth of Hugh Wiley stories. This turned out to be a lucky break for Monogram, too. In 1939, horror films returned with a vengeance and Karloff (who had been making expensive thrillers for Universal - and somewhat cheaper ones for Columbia) was suddenly a much bigger name than Monogram could have afforded…were he not already under contract. Karloff went on to star in a total of five Mr. Wong films for Monogram between 1938 and 1940. The sixth and final film in the series, Phantom of Chinatown, was issued in 1940 and actually starred Keye Luke (who replaced Karloff as a younger Mr. Wong).

MR. WONG, DETECTIVE (1938): When business magnate Simon Dayton is found dead inside his locked office moments after police detective Sam Street saw him at the window, renowned private detective James Lee Wong joins forces with the homicide squad to interpret the only clues found at the scene: tiny fragments of delicate glass. Soon sinister agents of foreign powers start appearing in the shadows, Dayton's business partners start dying under equally mysterious circumstances, and Wong and Street have to race against time to prevent more murders…possibly their own!

THE MYSTERY OF MR. WONG (1939): When a wealthy collector of Chinese antiques (with a list of enemies as long as a phone directory) is accidentally shot during a game of charades, brilliant Chinese detective James Lee Wong immediately suspects foul play. His suspicions are confirmed when it is discovered that a valuable gem has been stolen from the collector's safe. Captain Street of Homicide shows up mere moments after the shooting, explaining that the murder was reported 20 minutes ago. Wong, Street, and their old friend Professor Janney combine wits and resources to solve this most perplexing case.

MR. WONG IN CHINATOWN (1939): The famous private detective James Lee Wong takes it personally when a Chinese princess is killed with a poison dart in his own home. He sets out to find her killer, with help from reporter Bobbie Logan. The trail leads to international arms-smugglers, shady bankers, mute midgets, and tea-sipping Tong leaders…any of whom may have done in the princess.

THE FATAL HOUR (1940): When a common close friend is murdered while investigating smuggling on the San Francisco waterfront, private detective James Lee Wong, crime-beat reporter Bobbie Logan, and Captain Street of Homicide devote all their skills to finding the killer. Their respective investigations zero in on a failing retailer of imitation Chinese antiques, a waterfront nightclub being run by a shady gambler, and the obscure connections that exist between them. When more bodies start to pile up, Wong must solve the case, or become a victim himself. But how can he hope to catch a killer who can commit murder within Street's own squad room?

DOOMED TO DIE (1940): When shipping magnate Cyrus Wentworth is murdered, Captain Street immediately arrests the only possible suspect: the disgruntled fiancé of his daughter, the only person in the room with him when he died. Reporter Bobbie Logan is convinced the case is not as simple as Street believes, and she hires San Francisco's leading private detective James Lee Wong to clear the couple of suspicion by finding the true killer. Complications emerge when evidence of connections between Wentworth, Tong criminal activity, and the mass-murder of 400 passengers onboard one of Wentworth's ships are revealed... and Mr. Wong himself comes under fire from gangsters and killers.

PHANTOM OF CHINATOWN (1940): When a famous archeologist and expert in ancient Chinese history is murdered during a lecture on his latest expedition, young Chinese-American and recent Oxford graduate Jimmy Wong teams with homicide detective Bill Street to solve the mystery of his murder. They soon find themselves snared in a web of international intrigue, involving agents of foreign powers, "eternal flames," secret imperial tombs, and dead men appearing to kill from beyond the grave. 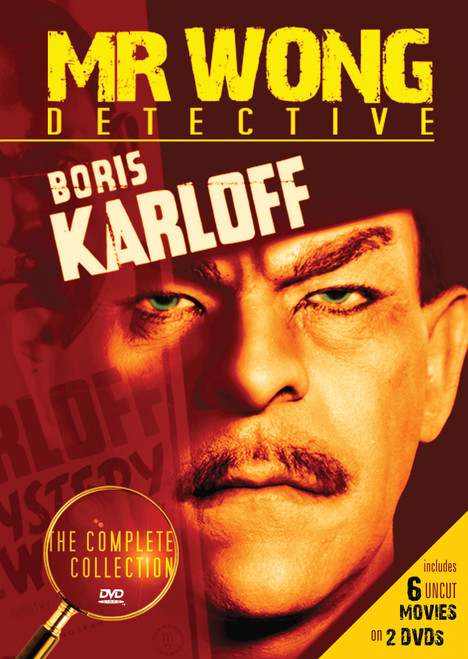